Half of what we know about coffee is wrong

According to legend, ancestors of today’s Oromo people in a region of Kaffa in Ethiopia were believed to have been the first to recognize the energizing effect of the coffee plant,[6] though no direct evidence has been found indicating where in Africa coffee grew or who among the native populations might have used it as a stimulant or even known about it, earlier than the 17th century.[6] The story of Kaldi, the 9th-century Ethiopian goatherd who discovered coffee when he noticed how excited his goats became after eating the beans from a coffee plant, did not appear in writing until 1671 and is probably apocryphal.

Other accounts attribute the discovery of coffee to Sheikh Omar. According to the ancient chronicle (preserved in the Abd-Al-Kadir manuscript), Omar, who was known for his ability to cure the sick through prayer, was once exiled from Mocha in Yemen to a desert cave near Ousab (modern day Wusab, about 90 km east of Zabid). Starving, Omar chewed berries from nearby shrubbery, but found them to be bitter. He tried roasting the seeds to improve the flavor, but they became hard. He then tried boiling them to soften the seed, which resulted in a fragrant brown liquid. Upon drinking the liquid Omar was revitalized and sustained for days. As stories of this “miracle drug” reached Mocha, Omar was asked to return and was made a saint. From Ethiopia, the coffee plant was introduced into the Arab World through Egypt and Yemen.

The earliest credible evidence of coffee-drinking or knowledge of the coffee tree appears in the middle of the 15th century in the accounts of Ahmed al-Ghaffar in Yemen. It was here in Arabia that coffee seeds were first roasted and brewed, in a similar way to how it is now prepared. Coffee was used by Sufi circles to stay awake for their religious rituals.[20] Accounts differ on the origin of coffee (seeds) prior to its appearance in Yemen. One account credits Muhammad ben Said for bringing the beverage to Aden from the African coast. Other early accounts say Ali ben Omar of the Shadhili Sufi order was the first to introduce coffee to Arabia.[22] According to al Shardi, Ali ben Omar may have encountered coffee during his stay with the Adal king Sadadin’s companions in 1401. Famous 16th century Islamic scholar Ibn Hajar al-Haytami notes in his writings of a beverage called qahwa developed from a tree in the Zeila region.

By the 16th century, it had reached the rest of the Middle East, Persia, Turkey, and northern Africa. The first coffee smuggled out of the Middle East was by Sufi Baba Budan from Yemen to India in 1670. Before then, all exported coffee was boiled or otherwise sterilised. Portraits of Baba Budan depict him as having smuggled seven coffee seeds by strapping them to his chest. The first plants grown from these smuggled seeds were planted in Mysore. Coffee then spread to Italy, and to the rest of Europe, to Indonesia, and to the Americas.

A beverage as black as ink, useful against numerous illnesses, particularly those of the stomach. Its consumers take it in the morning, quite frankly, in a porcelain cup that is passed around and from which each one drinks a cupful. It is composed of water and the fruit from a bush called bunnu.

From the Middle East, coffee spread to Italy. The thriving trade between Venice and North Africa, Egypt, and the Middle East brought many goods, including coffee, to the Venetian port. From Venice, it was introduced to the rest of Europe. Coffee became more widely accepted after it was deemed a Christian beverage by Pope Clement VIII in 1600, despite appeals to ban the “Muslim drink.” The first European coffee house opened in Rome in 1645. 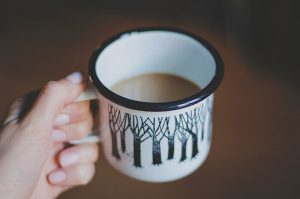 A 1919 advertisement for G Washington’s Coffee. The first instant coffee was invented by inventor George Washington in 1909.
The Dutch East India Company was the first to import coffee on a large scale.[24] The Dutch later grew the crop in Java and Ceylon. The first exports of Indonesian coffee from Java to the Netherlands occurred in 1711

Through the efforts of the British East India Company, coffee became popular in England as well. Oxford’s Queen’s Lane Coffee House, established in 1654, is still in existence today. Coffee was introduced in France in 1657, and in Austria and Poland after the 1683 Battle of Vienna, when coffee was captured from supplies of the defeated Turks.

When coffee reached North America during the Colonial period, it was initially not as successful as it had been in Europe as alcoholic beverages remained more popular. During the Revolutionary War, the demand for coffee increased so much that dealers had to hoard their scarce supplies and raise prices dramatically; this was also due to the reduced availability of tea from British merchants,[28] and a general resolution among many Americans to avoid drinking tea following the 1773 Boston Tea Party.[29]

After the War of 1812, during which Britain temporarily cut off access to tea imports, the Americans’ taste for coffee grew. Coffee consumption declined in England, giving way to tea during the 18th century. The latter beverage was simpler to make, and had become cheaper with the British conquest of India and the tea industry there.[30] During the Age of Sail, seamen aboard ships of the British Royal Navy made substitute coffee by dissolving burnt bread in hot water.

The Frenchman Gabriel de Clieu took a coffee plant to the French territory of Martinique in the Caribbean, from which much of the world’s cultivated arabica coffee is descended. Coffee thrived in the climate and was conveyed across the Americas.[32] Coffee was cultivated in Saint-Domingue (now Haiti) from 1734, and by 1788 it supplied half the world’s coffee.[33] The conditions that the slaves worked in on coffee plantations were a factor in the soon to follow Haitian Revolution. The coffee industry never fully recovered there.[34] It made a brief come-back in 1949 when Haiti was the world’s 3rd largest coffee exporter, but fell quickly into rapid decline.

Meanwhile, coffee had been introduced to Brazil in 1727, although its cultivation did not gather momentum until independence in 1822.[35] After this time massive tracts of rainforest were cleared for coffee plantations, first in the vicinity of Rio de Janeiro and later São Paulo.[36] Brazil went from having essentially no coffee exports in 1800, to being a significant regional producer in 1830, to being the largest producer in the world by 1852. In 1910-20, Brazil exported around 70% of the world’s coffee, Colombia, Guatemala, and Venezuela, exported half of the remaining 30%, and Old World production accounted for less than 5% of world exports.